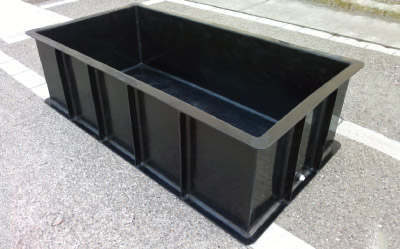 Rectangular tanks in the form of tubs and pools are manufactured of flat plates made of high density polyethylene HDPE. Tubs and all similar vessels are made in all dimensions, according to the technical documentation and according to the requirements of the user.

They are often used as galvanizing tubs and for the storage of aggressive fluids and acids, but also as tanks that are used as safety pallets to collect hazardous fluids and chemicals that may leak from the original packaging.

They have the role of collecting liquids in the event of a regular tank failure, so as not to endanger human health and the environment. Our manufacturing process guarantees them a favorable price for customers and an exceptional quality while respecting all environmental standards and regulations.